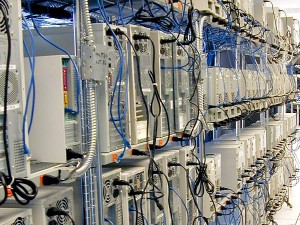 This, my friends, is the internet (or at least a small bit of it)

After seeing this stuff spread across the internet, I thought I would interject, and explain to everyone how the internet “actually” works.

Recently, I have started seeing more and more internet service providers claiming that a small percentage of their users are “hogging” all the bandwidth. That a small group of users are using the networks so much, it is bogging down the system for everyone else.

There is a small modicum of truth in that idea, but you need to understand how networks actually work before seeing how garbage that claim actually is. Lets say I go out and start up an ISP in Chicago. I put up one “data path” (connection to the internet as a whole) for my soon-to be customers, and eventually get my first customer. He thinks it is great, it is fast as hell, and he is happy. So happy, in fact, that he goes out and tells all his friends how awesome my service is. A few weeks down the line, 10 of his friends decided to try me out, so signed up. Now instead of one person on that data path, there are 11.

Imagine this as a group of cars on the highway merging into a single lane of traffic. When there is one car, everything is all fine, and he goes on like there are no problems. What happens when there are 11 cars? The cars start to jam up, and some get forced to wait their turn to merge into the proper lane. This is what is happening.

Now customer 1 is calling and complaining that his internet service is sluggish, and not nearly as fast as it was when he signed up. Who’s fault is this? Is this the fault of the customers – regardless of how much information they are using up, it is nothing more than one more car on the hypothetical highway above doing the same speed as everyone else, or is it the fault of the system operator – the entity that is in charge of making sure there are enough lanes available on the highway so that users can get through without long wait times.

Go back to the highway scenario… do you blame the car in front of you for the traffic jam… or the entity that caused the jam in the first place?

Next time you hear someone say that the dirty users are using up too much data and ruining a good thing for everyone… call shenanigans on them, and tell them that the ISP is just being cheap, and using users as a fall-guy instead of upgrading their networks to provide a level of service they promised you when you signed up (and are more than happy to charge you for getting)

This entry was posted by Jason on February 25, 2012 at 12:50 am, and is filed under Off Topic. Follow any responses to this post through RSS 2.0.You can leave a response or trackback from your own site.