What Hosting Should I Use? »

I recommended building this using either phpFox or Dolphin, but they wanted WordPress, so I just had to find a way to make it work. I eventually settled on using an install of WordPress with an install of the BuddyPress plugin. I then proceeded to develop the a custom template and several custom plugins that helps drive their desired functionality. The biggest “wins” in this project are the ability to pre-screen user profiles, and the ability for users to self-moderate by setting up a flagging system with an auto-ban. 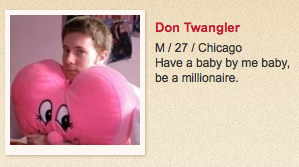 There has been a steady flow of traffic, and a little over 200 user registrations at the time of writing. This is including several profiles that I highly suspect are fake, but are absolutely hilarious nonetheless. Take “Don Twangler,” one of the first users on the site. Lovingly clutching a heart shaped pillow while needfully staring into the camera, with a catching pickup line.. or not so much. There are some other ones, including this one, which is just.. well.. you just have to see it.

The comedic value of these profiles, even the ones that appear to be real inspires me to believe that this site might actually work. What better place to find someone than a place where the people don’t take themselves too seriously. You should check it out, you will get a good laugh, and maybe you might actually find yourself some Groupon love in the process, not to mention a nice $60,000 scholarship for your little Grouspawn if he or she is the outcome.

This entry was posted by Jason on October 3, 2010 at 5:03 am, and is filed under Projects. Follow any responses to this post through RSS 2.0.You can leave a response or trackback from your own site.