I have been fairly busy since the last time I posted, working on several projects simultaneously, so lets go over a few of them, shall we?

Six Ways From Sunday (the band)

These guys are all pretty good friends (and then Tim), so when Sarah commissioned me to build them a website, I jumped at the opportunity. She was kind enough to provide me with a pretty decent design that matches this band’s music fairly well, so I got to work.

This site is a relatively simple WordPress setup that allows them the ability to easily add shows to their schedule, update photo-galleries, and post their new stuff. And from what I can tell, they loved it.

Someone came up with the idea to allow our salespeople here at Groupon the ability to create sample deals to show off to their merchants, and it eventually reached my desk (or email inbox, whichever) to finish it up. It is a pretty neat little tool that will reflect changes on a mock-deal-page in real time as the user types. Even going as far as allowing the user the choice between uploading their own custom deal image, or selecting from a group of kinda-stock photos from our awesome image-designers.  All the arrows in the image below are editable areas.  Nice and simple to change.

Groupon Central is the neat little internal tool I have been working on recently that makes everyone’s job easier and ensures everyone’s problems and questions get to the proper place. Check out the brief walkthrough below! There really isn’t any user benefit other than us employees being able to streamline getting things done.

Sorry, I have not been able to update with the new projects – they are finished, just not launched. As soon as the powers that be throws them out there, I will be able to put them up here. They should be coming out very soon, so keep an eye out.  Below is a sample of one of the cooler ones. 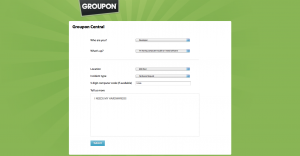 Groupon Central is an internal tool for all the US employees to easily send out messages to the right person.  This app is PHP and a lot of AJAX, that will guide them to the right place.  Set up with Google Authentication, I get their personal information when they go to the site, allowing me to personalize the site for them in their job role.

More to come on this soon.

1
by Jason in Projects

I am currently working on two major projects.  They should be finished at around the same time next week. Just letting you know I haven’t forgotten about this site.  Keep an eye out for an update, it’s going to be a big one.

In the meantime, I will give a brief update on this awesome WordPress plugin I built.  This plugin makes it quick and easy for writers to select categories related to what they are writing. As they type in the search box, categories will be shown and hidden in real time, allowing them to easily select what is relevant to their content without having to scroll through possibly hundreds of categories. 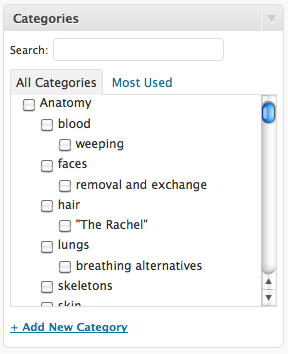 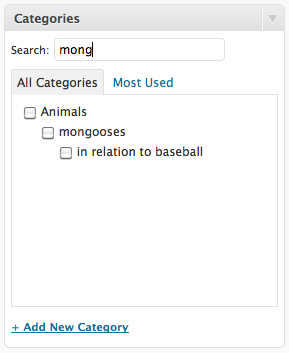